Click 'The Oracle' title above to enter The Oracle Forum and discuss your quest for answers with kindred spirits. Courtesy costs nothing - if you disagree with someone, disagree politely. Abuse is not tolerated.
Post Reply
13 posts • Page 1 of 1

just a quick thought I had.

I read somewhere, that it could be possible, that this universe we live in, could possibly not be the first nor the last one, we actually live in.
Even if you can't prove that, it doesn't hurt to just think for a moment, if it could or not, like what does it even bring?
Here is what it brought me:
Since I read it , I have this strange feeling, that it just could not only be true, I think it is.

I would not bet a pfifferling, that this is the last nor the first in existence.

Because I think, if there is a so called YHWH, I bet, he would be able to do so, but maybe we'll never find that out, but I think WE ALL will. 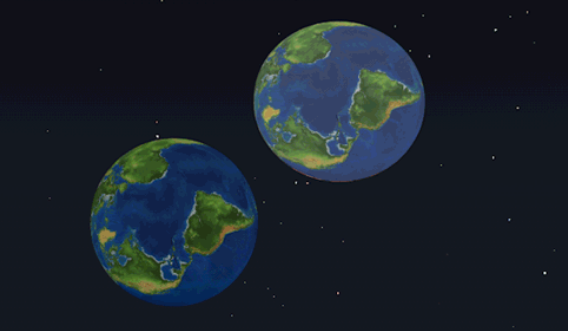 aaah just used nor the first time, hope it was done right, if not pls tell me.

Not only is your theory very compelling and interesting, it is also very real, true, and in fact, out there. With the use of new physics theories scientists have discovered that time has no direction. I've spoken about this in past posts, but in other terms than another dimension. Anyway, since scientists have made this groundbreaking discovery, everything we know about modern science changes today. That means there was no such thing as the big bang, for there was no beginning of time. Instead it was always there in an infinite loop going back and forth. Let's think of it this way:

The bang was more of a bounce, meaning two realities were opened. One going forward, or what we perceive as forward, and another going backwards, or again, what we perceive as backwards. This not only proves the existence of a time parallel universe, but it also suggests that there could in fact, possibly be other worlds and dimensions that we do not know about yet.


Another way to prove the existence of another dimension, doesn't even have to use science, even though it was first proven that way.
When you make a decision, you open up a different reality, or dimension in this case. That's why, unfortunately to some people's disappointment, our life is not planned out as we have free will in terms of making decisions. For example: you were asked to go on a trip with your friends, and you decided to stay. The outcome would've been completely different if you were to go with them. So in this case, you went into a different dimension of choice, or these terms, you accessed one of the infinite realities.

As you can see, the existence of other dimensions do exist, but not the ones I think you are talking about. People talk about portals to different universe with complexity and completely different creatures and atmosphere. Well that's a different topic that is very interesting in itself. And even though I did not prove that there places like that, my goal in this message was to show that it is certainly possible, and if anything quite real. Personally I totally believe in different universe, or some people call it the multi verse. Heck, there are quantum physicists in Tennessee that are trying to open a portal to a different universe using quantum mechanics and mirrors.

That clearly shows you if government scientists who know way more than we do, believe that it's out there, and are taking the time and money to research it, means that it is more than possible, quite real really.
I am the son of rage and love
Top

Also here is the link to the scientists in Tennessee who are trying to open a portal to a different universe:
https://www.nbcnews.com/science

And here is an interesting article on parallel worlds

Also real quick, looking back on your post, what did you mean by this isn't the first world we have lived on? Are you suggesting past life?
I am the son of rage and love
Top

I followed your whole posts and I definitely look that vid up you posted and come back later.

What I meant was just,

Couldn't it be possible that the "Big Bang" wasn't just the first one however, but it also could be the 4th or second or -2nd last like, you know? it's not really provable (now), but could be possible, I think.

That sounds really interesting. I do not want to expand my thoughts on this post because I created another topic that explains my ideas about it. Long story short, there are no other dimensions, everything happens in the very same Universe or dimension (as a place) but everything repeats. I would agree that it is not the first nor the last existence of ours, though it is just different time.

Very compelling post about your theory, and thank you for sharing your thoughts. However I must say, I dont exactly agree on things being predetermined unless there is a divine being guiding us towards a foretold prophecy or fate. From what I've studied, reality is constantly being altered in a way where there are infinite amounts of them. Thus meaning that it always changes and nothing is exactly predetermined as our ways and choices are constantly altering reality. So what you are saying in terms of everything happening in the same universe is absolutely true, although the rule of reality is changing within this universe.
I am the son of rage and love
Top

And yes, everything that is happening, will happen, and already happened is still going on. Since time has no direction, there is no present. It is merely a human measurement of time. We are here in this moment, but the past is still happening as is the future. Excuse me, countless pasts and futures are happening right now from infinite amounts of reality.
I am the son of rage and love
Top

thank both of you for your compeling answers, just one thing I have to say is, to just accept with the one thought that this is just the only reality there, which was is and will be, but for my part this thought is just to plain simple, regarding to the powers an alternate beeing would be able to do so, in my opinion. It's more of a feeling, then of knowing, believing.

First of all, thanks for the comment from as from someone who had actually studied stuff that we are talking about. It was interesting for me to hear your explanation. Well, when I talk to people about it, they always assume that predetermination is some "divine" being or fate but what I had in my head is that from the very beginning everything has some exact impact and there are many many many different factors that lead to specific outcomes.
Top

yellolite-j236 wrote: ↑
27 Nov 2019 20:04
First of all, thanks for the comment from as from someone who had actually studied stuff that we are talking about. It was interesting for me to hear your explanation. Well, when I talk to people about it, they always assume that predetermination is some "divine" being or fate but what I had in my head is that from the very beginning everything has some exact impact and there are many many many different factors that lead to specific outcomes.

I can see what you are saying, and makes sense. So you are almost in a way saying that there were so many different events that happened and then created this outcome, so it's almost random choice but it will always come out to the same factor that was supposed to happen? If that makes sense. Apologies for my misunderstanding of anything, in this sort of section in physics and science, nothing has yet been proven, so it is almost up to opinion and theories and theoretical research. We aren't sure yet, but anything in this universe can be possible.

My main question basically is, do you mean that reality is in a way playing dice? And that all these factors are random, but they lead to the same outcome or fate?
I am the son of rage and love
Top

while I didn't actually meant to bring this into the topic, it also could possibly fit in to it, too, but the point what I meant is, like people who think there could be civilization somewhere else on another planet, it also could be that this is not simply just the only reality there, which was/is/will be.

Elon Musk also did said something into that direction: 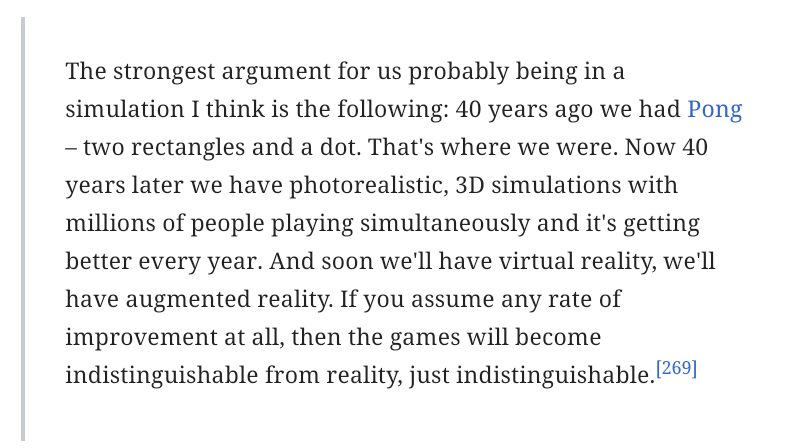 a bit like, mmh matrix or not...? regarding that it could be possible of all being a simulation, but not just one of all, but one in all, hope you kinda understand, what I mean.

Sh3rl0ck wrote: ↑
27 Nov 2019 20:11
My main question basically is, do you mean that reality is in a way playing dice? And that all these factors are random, but they lead to the same outcome or fate?

I do not mean that factors are random, but all the different factors/happenings/events lead to various different possible outcomes. But answering your question - it is a yes. Saying it in a witty way, even the dice is rolled in the same way, so as it is rolled at the "starting point", it would bring the same outcome every time. In mathematics, it would be a very complicated function that is periodical and has a repeating pattern.
Top
Post Reply
13 posts • Page 1 of 1