Click 'The Oracle' title above to enter The Oracle Forum and discuss your quest for answers with kindred spirits. Courtesy costs nothing - if you disagree with someone, disagree politely. Abuse is not tolerated.
Post Reply
2 posts • Page 1 of 1

I much not like the idea of being a prophet I just want to sew positive change into the world.
Last edited by Helios on 14 Apr 2020 09:26, edited 1 time in total.
He with traits of Ouranos down to his love for Gaia? He with balanced traits of Helios, Apollo, and Dionysus?
Born of Libra, with Sun and Moon in the Palms of my hand, Vector of Creation.
Top

Good evening Helios.......my my you have been plenty busy.

The five books of The Major Prophets - Isaiah, Jeremiah, Lamentations, Ezekiel, and Daniel - span both a significant period of time and a vast spread of messages. But in a sense were they chroniclers of thought or mere preachers, was it all their own work or were they organs of other mere mortals as well as god 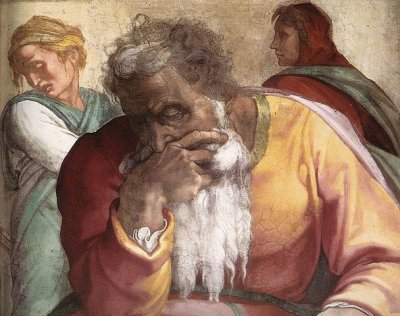 Jeremiah pictured above, was perhaps more is own man, he denounced his generation as spiritual and physical adulterers "going after other gods to their own hurt", and "like well-fed, lusty stallions, everyone neighed after his neighbour's wife" (Jer 5:8).

Biblically speaking a prophet is an individual who speaks on behalf of God or a deity, or one who is driven by divine inspiration, the old experience of seeing a vision perhaps, which can just as easily be pagan, the Druids most certainly had visions 'The dreamers of Mona' for instance. Within the Old Testament it is a person chosen to speak for God and to guide the people of Israel: the most obvious figure being Moses seen as the greatest of the Old Testament prophets.

However, taking a highly traditional view there are four major prophets who are actually believed to have been sent holy books: the Torah (Tawrat) to Moses, the Psalms (Zabur) to David, the Gospel to Jesus, and the Quran to Muhammad; only those prophets are considered to be true "Messengers" or rasul. Yet another school of thought says there are five so called 'resolute prophets' remove David, then add in Noah of Ark fame along with Abraham. Much to unravel.

Others teeter in the background but are larger than lifeUzair (Ezra) lived during the period around 450 B.C. The Jews held him in great reverence, he was the revivalist of their scriptures lost during a period of captivity in Babylon following the death of the definitively titled Prophet Solomon. An intermediary between humanity and a supernatural being who delivers messages or teachings from the supernatural source to other people.
Top
Post Reply
2 posts • Page 1 of 1

Users browsing this forum: No registered users and 13 guests