Click 'The Oracle' title above to enter The Oracle Forum and discuss your quest for answers with kindred spirits. Courtesy costs nothing - if you disagree with someone, disagree politely. Abuse is not tolerated.
Post Reply
14 posts • Page 1 of 1

Sator is a fun game that stimulates my mind and speaks to my spirit. It seems to be linked to the myth of the founding(and refounding) of Rome (I recommend the Nicola Iannelli's book: SATOR, EPIGRAFE DEL CULTO DELLE SACRE ORIGINI DI ROMA).

In this rotating letter is hidden the secret of Malach ha-Mavet -> Mot-Her-Ship and number THREE -> TRE in Italian. 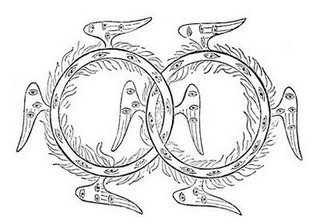 What are BLACK PEARS?

Pear. In Greek and Roman mythology, pears are sacred to three goddesses: Hera (Juno to the Romans), Aphrodite (Venus to the Romans), and Pomona, an Italian goddess of gardens and harvests.
The ancient Chinese believed that the pear was a symbol of immortality. (Pear trees live for a long time.) In Chinese the word li means both "pear" and "separation," and for this reason, tradition says that to avoid a separation, friends and lovers should not divide pears between themselves.


So BLACK PEARS are those who are separated in themselves, those who divide, those who have the adversary inside them.

And... who is SATOR, the Mashiach / Maitreya?

This is the question

May 13 and the destruction of Roman Temple

May 13, in addition to being known as the date of the first apparition of Fatima, it was in ancient Rome a dies religiosus, a day disliked by the fortune which was better not to carry out any activity.

It was also the last day of Lemures festivities dedicated to the spirits of the night.

Tradition says that to establish these festivities had been Romulus to appease the spirit of his brother Remus, killed by him.

The Lemurs (from the Latin "lemures") meaning "spirits of the night", also called Larva[e], (phantom is equivalent term) are the spirits of the dead of the Roman religion, viewed as vampires, souls who cannot find rest cause of their violent death. According to the myth they returned to earth to haunt the living, persecuting people to take them to madness.

The Vatican Hill, not included among the seven hills of Rome (Aventine, Capitoline, Palatine, Celio, Esquiline, Quirinal, Viminal), was the Roman Necropolis, dedicated to the burial of the dead, who were to enjoy a privileged position, at altitude , compared to the living.

Due to its elevated position than the other 7 hills, the eighth hill was well used by people more wealthy and noble for the cult of the dead ... Mons Vaticanus would seem to derive from the Latin vaticinari, prophecy, prophesy ...

The Vatican Hill was also an area dedicated to the cult of Cybele, the Great Mother Goddess Idea, the Roman Magna Mater:

May 13 is also the date when, in 609 the pagan temple of Pantheon was consecrated to Catholic worship and more specifically to Santa Maria ad Martyres.
The Martyrs, the dead, executed for the murderous hand, like Remo and how all those killed by human hand, still screaming righteousness to God.

Definitively the Fatima prophecy collects in predictions about the spirits of the dead, the closing of a cycle, highlighting a date that it was essential in Rome and predicts its destruction.

That date prophesies the circular completion of an Opera that has a link with the Foundation Myth, with the birth and death.


13 roman and mysterious deaths
13 apostoles’ accusations
13 the number of Fatima and its Secret
13 levels of the pyramid, with the veto on the top

Who is Mashiach? This is the question...

Baphomet, the Antichrist, Saturn the sower and mower, SATOR...

It is hidden in George Ripley's song:

Cernunnos and the Goat with the five pointed star...union between Universes
Top

Forgive me, I am inspired

October 13, date of the last apparition of Fatima, corresponds to Fontinalia, the festival of the sacred sources dedicated to the god Fons, son of Janus!

This festival is bound to the invisible water sources and springs that become visible. Springs, wells and fountains are decorated with wreaths of flowers that are thrown into rivers in the vicinity of the sources.
In reality it is much more complex than it might appear at first glance at the profane.

In this feast is sanctified a very important aspect of water as fons et origo, (source and origin) or primordial element which gathers together all of existence potentiality. The characteristic of being origo explains why Fons / Fontus are related to Janus (The Beginning).

The most important aspect of Fontinalia (visible / invisible water) is therefore the consecration of what precedes any form and all creation.

This visible / invisible cyclicality corresponds to the immersion / emersion relationship: the emersion is the cosmogonic act of the event while immersion is a dissolution. Water (element regeneration) then shows the cycle of life and death.

The water also, as it precedes the creation, has a specific symbology "aquatic" (eg the shell). The waters are related to Female Polarity, to the Moon, to Matter, to undifferentiated vitality.

Cyclicality and becoming expressed by waters binds therefore to the complex symbolism of Janus.

During Fontinalia Horus and Seth make peace, the two faces of Janus find a harmonious arrangement, the polarities stop war, life and death pacify themselves, Judah and Dan's tribes generate an offsping.

He said to me: "It is done. I am the Alpha and the Omega, the Beginning and the End (fons et origo) . To the thirsty I will give water without cost from the spring of the water of life. 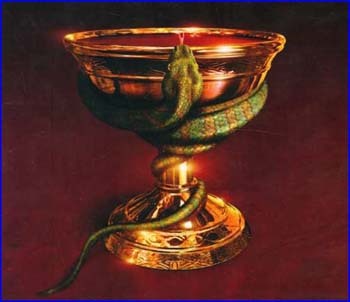 The Cross with a scythe (n)

Users browsing this forum: No registered users and 14 guests